Born in Quarantine: The Story of Kiera, a Midwife From England - WEIRDO
BE WEIRD BY CHOICE

Kiera was born to be a midwife. Her mother was a midwife and Kiera comes from a family of strong women. She believes in the power of female support and in the

privilege of being a part of one of the most important experiences of a woman’s life: the road to motherhood.

She loves the bond that is naturally born with the mothers and their families. She loves listening to the women, supporting them and educating them around their choices. Kiera has been qualified to work as a midwife for almost one year and she practices in the East of England. She has worked under Covid-19 for most of her young career.

The United Kingdom was slow in its response to Coronavirus. By mid July, the country had reported 45,878 deaths and 300,692 cases. However, the numbers seem to be flawed. A recent controversy sheds doubts on the UK’s data. Tired of the criticism, the country decided to rapidly release the numbers of tests, sometimes literally writing them by hand of spreadsheets. The stats had to be quick, not accurate. Often, tests had been double-counted and the English government had to admit its fault.

“There was  a sense of underlying fear, almost the calm before the storm. We had no experience of dealing with something like this, so had no idea of what to expect,” said Kiera.

Hospitals can’t identify their full exposure and they are using universal precautions for all women. But healthcare workers aren’t exempt from this new, Covid-19 reality. Kiera’s colleagues moved out of their homes and they stayed away from families, afraid of bringing the virus home. The staff and protective personal equipment (PPE) shortage, the increased administrative work, and the lack of normal social interactions: Coronavirus caused disruption in the hospital.

Safety was on everyone’s mind although it is impossible to maintain social distance while caring for a woman in labor and during childbirth. Midwives can’t social distance, since they are used to holding hands and providing counter pressure. And masks didn’t help.

“We rely on our facial expressions to provide reassurance to women and their families, “ says Kiera, “a small smile can go a long way, I often forget that women can’t see the smile behind my mask.” 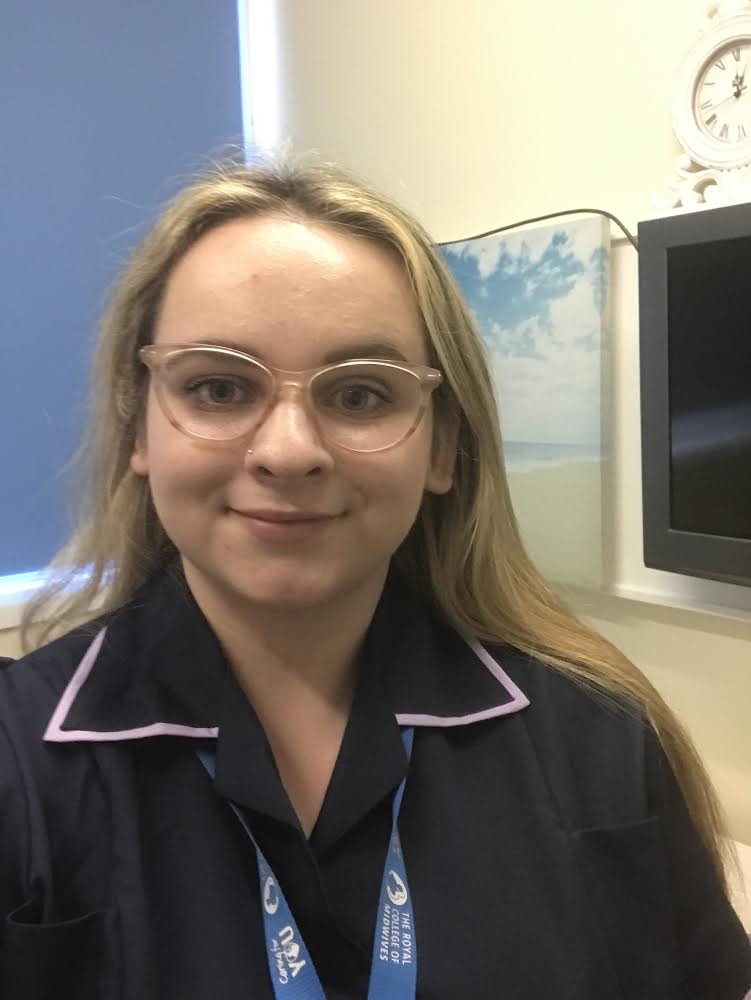 Sometimes the smile is difficult to keep, even for a dedicated midwife like Kiera. Her team lost one of the colleagues at the beginning of the pandemic but they couldn’t comfort each other. They couldn’t hug and they had to keep working as normal. But there is no normal with Covid-19, not for the healthcare workers, not for the patients.

Women had to go alone to the checkups and screenings and they couldn’t have any visitors, which is particularly difficult during prolonged admissions. That’s when Kiera noticed women’s resilience and strength, with mothers supporting and laughing in the maternity unit, creating a unique bond. The unprecedented time of Covid-19 has highlighted how supportive and kind we can all be, said Kiera.

“I am very proud and lucky to work alongside my colleagues,” said Kiera, “their appreciation has also been lovely feedback to have, during such a stressful time. A thank you really does go a long way.”

Slowly, midwives like Kiera are starting to settle in the Coronavirus era, but as some restrictions ease and lift in England, she wants us to remember we are still living during a global pandemic.

“Wash your hands, wear a face covering when in public and remember to take care and support one another.”

Get 10% off your first purchase by joining our mailing list,
and receive some of the best deals possible.

“Yes, we ship Everywhere in India”